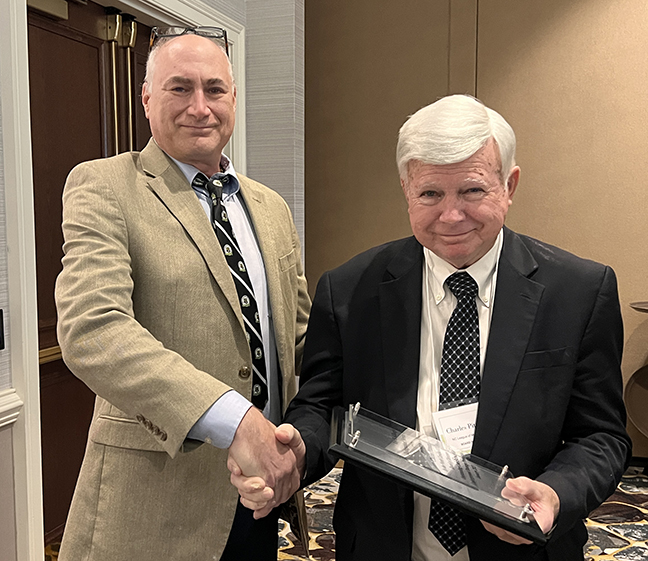 Charles Pittman, Board member of NC 811 for 14 years, was honored during the 2022 Q4 Board meeting, January 20th 2023, as the latest recipient of the Ray B. Killough Distinguished Service Award.

The Ray B. Killough Distinguished Service Award recognizes that safety and damage prevention is a shared responsibility between utilities, facility locators and excavators and honors those individuals who have made outstanding contributions to the One Call Center and to the reduction of facility damages in North Carolina in the same spirit and superior service that distinguished Ray B. Killough throughout his tenure as a Board Member of North Carolina One Call Center, now NC 811.

Although retired in 2009, Charles Pittman, former Assistant City Manager for the City of Wilson, continued to remain the League of Municipalities’ choice to represent the interest of the cities and counties in North Carolina. During his 14 years of service to NC 811 Charles served on every committee at one point or another and was witness to and a participant in many changes at NC 811, including a move to assessment based billing of membership, choosing a successor for George Glenn in 2011, the investment in Norfield and the purchase of the new office complex in Greensboro.

Charles Pittman is known for many accomplishments while at the City of Wilson. Perhaps best known for his efforts to expand Buckhorn Lake, coordinate the Transportation Improvement Program, organized the Downtown Streetscape Rehabilitation, helped to establish Burt Gillette Athletic Complex, efforts to make upgrades to Wilson’s Wastewater Treatment Plant, established the Stormwater division, worked with the Water Resources to establish Wilson’s Water Re-Use Program, and he purchased the city’s first computer in 1971.

Louis Panzer, NC 811 Executive Director, stated “Mr. Pittman exemplifies outstanding commitment to NC and damage prevention, providing direction and leadership while representing the League of Municipalities through 14 years of service. It has been an honor to work with him through my time and his voice of reason and experience will be missed on the Board.”

Since 1978 NC811 has provided you a fast and easy communications link with your local utility providers. You give us information about your excavation, we transmit the information to the utilities and then the utilities send out locators to mark your publicly managed underground lines for FREE. Contact 811 or 1-800-632-4949 three working days before you plan on digging.  #SafetyFirst